short story slam week 112, blogging from a to z, V is for Virginia State University 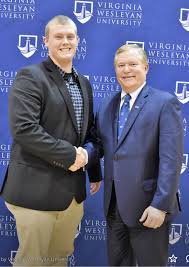 Dr. Robert “Bob” Hasty is immersed in music. The Evanston resident is principal conductor of the Highland Park Strings, associate director of orchestras at Northwestern University, and music director of the Kenosha Symphony Orchestra and the Skokie Valley Symphony Orchestra, as well as a frequent guest conductor and freelance violinist and violist. He is married to singer-songwriter Christina Trullio.

Q: What was your career goal when you were growing up?

A: I wasn’t sure. I just knew I didn’t want to do music. A lot of that was because my parents were. I think I just wanted to be independent and follow my own path. My dad is a choral musician and a professionally trained singer. My mother has two degrees in music as a singer. My brother also is in choral music. I was the black sheep of the family. I went into instrumental music.

Q: How did you initially avoid going into music?

A: I was really interested in math and engineering. I went to USC (University of Southern California). Even though I was a violin major, I studied other subjects — ready to change my major at any moment.

Q: When did you begin conducting?

A: I realized who I admired most in music. It was teachers because they had families and lives and other interests. I believe the conductor inside of me was saying, “Go into teaching because you’ll get to conduct.” So I switched my major to music education and became a high school band and orchestra teacher.

Q: What do you enjoy about performing with your wife?

A: It’s something we can do together. It was the first opportunity I had to play fiddle and improvise.

Q: Do you have children?

A: My stepdaughter Emily has given us two grandkids, Sadie and Hugo. My wife and I have two others. My son Christopher goes to Indiana University and my daughter Sophie is a senior at Evanston Township High School.

Q: Do you have any pets?

A: We have a pretty old dog named Angus and we gave my daughter a cat that she named Mordechai.

Q: What’s your idea of a perfect day?

A: Riding my bike. I’m an avid bicyclist. I just finished riding the North Shore Century. Brewing beer. If there’s a USC football game on, that would be the perfect day. And, of course, spending time with my family.

Q: What’s your most prized possession?

A: My family is the greatest gift. All of the other possessions don’t mean that much to me.

Q: What current movie would you recommend?

A: “Won’t You Be My Neighbor?,” the one about Fred Rogers.

Q: What book are you reading?

A: I really enjoy books about spirituality. I’m reading “What is the Bible?” by Rob Bell.

Myrna Petlicki is a freelancer.

This entry was posted in Uncategorized. Bookmark the permalink.

2 Responses to short story slam week 112, blogging from a to z, V is for Virginia State University